The Versal® HBM series features heterogeneous integration of fast memory, secure connectivity, and adaptive compute to eliminate processing and memory bottlenecks for memory-bound, compute-intensive workloads such as machine learning, database acceleration, next-generation firewalls, and advanced network testers. It is built from the ground up to adapt to continually evolving algorithms, protocols, and data rates. Watch the overview video for more details.

With the integration of HBM2e DRAM, the Versal HBM series provides 8X more bandwidth1 at 63% lower power than DDR5. Built on a production-proven Versal Premium ACAP foundation,  the Versal HBM series integrates an extensive set of networked, multi-terabit, power-optimized connectivity cores and 112G PAM4 transceivers to adapt to emerging network protocols and modules. While doubling the transceiver speed, the Versal HBM series secures every layer of the network infrastructure with built-in encryption engines. With the programmable network on chip (NoC), up to 2.2Tb/s of on-chip connectivity alleviates routing congestion between all engines. In addition, the Versal HBM series offers twice the logic density of the previous generation HBM solution to maximize performance for constantly evolving algorithms and protocols.

1: Based on a typical system implementation of four DDR5-6400 components

Integration of HBM2e technology delivers up to 820GB/s memory bandwidth and 32GB capacity to minimize power, area, and latency for compute-intensive applications. Compared to commodity memory solutions (DDR5), the Versal HBM ACAP enables 8X more bandwidth at 63% lower power by placing stacked memory immediately adjacent to the compute fabric. Integrated HBM is globally accessible from anywhere on the device by the programmable NoC. With an integrated memory controller and enhanced hardened switch function, any memory location is accessible from any port.

At the heart of the Versal architecture's flexibility are its Adaptable Engines, enabling the development of custom computational blocks for differentiation, future-proofing, and the ability to adapt with ever-changing algorithms and protocols. Loaded with a wide variety of on-chip memory elements and tightly coupled with programmable I/O, the Adaptable Engines provide massive parallel processing and customization capability, critical for many compute-intensive workloads with large data sets.

The DSP Engines provide support for a variety of operations and data types, including single and half-precision floating-point and complex 18x18 operations. As enhancements of the previous generation technology, the DSP Engines are backwards compatible to UltraScale+ FPGA and SoC designs. Users can either leverage their existing libraries or update their designs for the maximum compute performance.

Get more details on the Versal HBM series 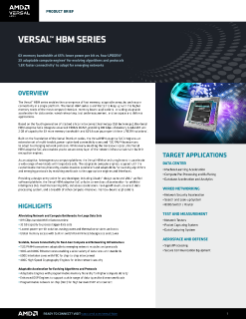 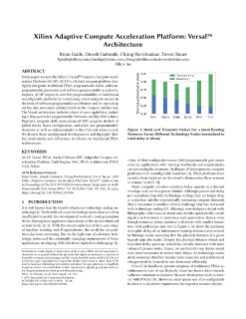 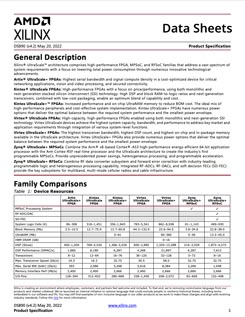 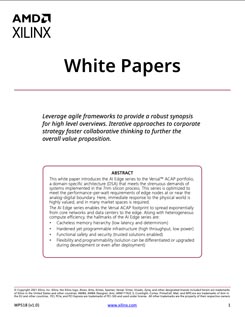 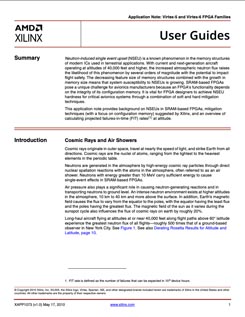 Xilinx provides a breadth of documentation, resources, and methodologies to accelerate your development on the Versal architecture. If you’re not sure where to begin with Versal ACAPs, the Design Flow Assistant is an interactive guide to help you create a development strategy, while the Design Process Hubs are a visual and streamlined reference to all Versal documentation by design process.

The Versal® HBM series is currently in Early Access. Contact your local Xilinx sales representative to apply for the Early Access program or visit the Contact Sales page. Leverage the resources below to learn more about design tools and design methodologies for the Versal ACAP architecture.

Integrated Software and Hardware Platform for All Developers

The Xilinx Vitis™ unified software platform provides comprehensive core development kits, libraries that use hardware-acceleration technology. The platform provides an efficient, convenient, and unified software environment from the cloud to the edge. As a proud member of the opensource community, the Vitis unified software platform is free and offers an extensive set of open-source, performance-optimized libraries that offer out-of-the-box acceleration with minimal to zero code changes to your existing applications.
Download Vitis Unified Software Platform >

Xilinx training and learning resources provide the practical skills and fundamental knowledge you need to be fully productive in your next development project.

Xilinx provides a breadth of documentation, resources, and methodologies to accelerate your development on the Versal architecture. If you’re not sure where to begin with Versal ACAPs, the Design Flow Assistant is an interactive guide to help you create a development strategy, while the Design Process Hubs are a visual and streamlined reference to all Versal documentation by design process.