Virtex-6 HXT Devices: How to Identify ES vs. Production Silicon?

This Answer Record explains how to identify the Silicon version ofthe Virtex-6 HXT devices as ES versus Production.

The Virtex-6 HXT devices can be identified as ES (2.0) or Production (2.1) Silicon by different methods.

The silicon version can be identified by visual inspection of the part marking on the devices.

Generally, engineering samples have "ES" or "CES" printed after the speed grade and temperature range on the last line of the part marking (as shown in the example below): 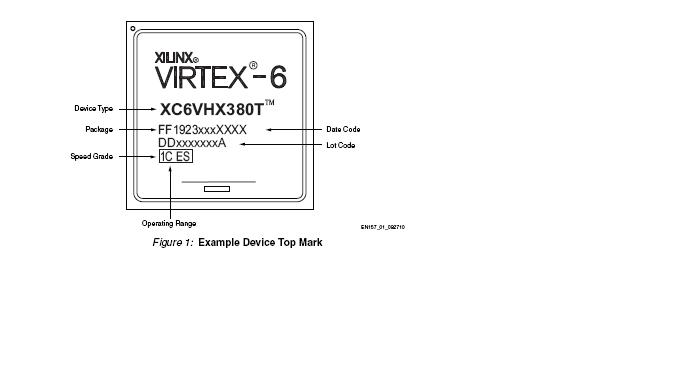 The ES or CES marking, in general, refers to the 2.0 silicon version. However, there are a few exceptions where ES refers to 2.1 silicon if the part marking reads asCES9929 or CES9930. If there is no ES/CES marking on the devices or if the SCD marking reads as SCD42xx, then these would refer to the Production Silicon (2.1) version.

The version of silicon on your board can also be determined by reading the JTAG ID in theiMPACT software.For example, in the iMPACT GUI the JTAG ID of the specific devicecan be read as follows:

1. Connect one of the Type-A to Type-Mini-B USB cables (shipped with the board) to the USB JTAG Download Port (J4). Ensure that it is the JTAG portthat you connect to, and not the UART port.
2. Open up iMPACT, double-click Boundary Scan in the iMPACT Flows window.
3. Right-click in the Boundary Scan window and select Initialize Chain.
4. When the XC6SLX45T device appears in the Boundary Scan window, select it (it will turn green).
5. Double-click Get Device ID in the iMPACT Processes window to read the JTAG IDCODE (see below).

For example, the resulting readout from a Spartan-6 SP605 board should be similar to the following: 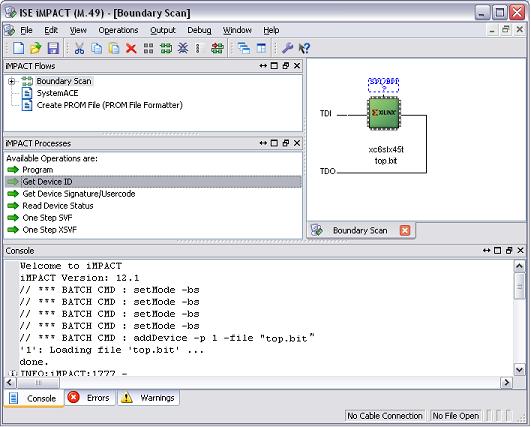 This same process can be used to identify the JTAG IDCODE for Virtex-6 HXT devices whichdetermines which version of silicon you have.


The following look-up table can be used as aquick reference to identify the silicon version:

The answer records and GTH wizard versions referenced in this article address 2.0 silicon as ES and 2.1 as Production.