MIG UltraScale - Is there an automated way to create MIG IP with a custom pin-out until MIG pin planning is integrated into I/O Pin Planner in 2015.1?

MIG UltraScale currently does not provide any easy to use flow for pre-existing pin-outs.

Uploading an XDC file for initial pin-out creation or for pin modifications is not yet available.

Currently, you have to open the MIG tool and manually enter all pins.

Additionally, if IP changes are required, the manual pin selections have to be completely re-entered.

This will allow XDCs to be imported and I/O placements and mapping within the MIG IP will automatically be created.

Until 2015.1 is available, this answer record contains a Tcl script that can be run to create the IP with an input XDC.

Details on how to use the script are below.

Steps for usage of the get_mig_pin_mapping script:
1. Download and save the attached get_mig_pin_mapping.tcl script.
2. Configure the desired MIG UltraScale IP.
3. Select "OK" within the MIG tool to generate the IP but then select to "Skip" on the "Generate Output Products" prompt. 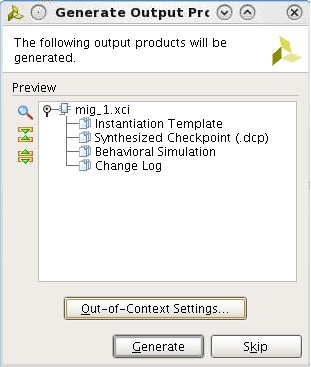 4. Within the Vivado Tcl console, change directories to the location of the previously downloaded get_mig_pin_mapping.tcl script.
5. Run the following commands:

This time select "Generate" to allow all files to be generated and, if selected, out of context Synthesis to be run.

The MIG IP is now configured according to the XDC pin-out input through the Tcl script and is ready for general use.