With Aurora 8B10B v11.0 Rev2 or later IP generated for Artix-7 GTP, channel-up is observed to be toggling periodically and does not achieve stable channel_up assertion.

This issue is observed with all Aurora 8B10B configurations when the IP is generated in Verilog.

IP generated in VHDL is not impacted by this issue. This answer record provides the work-around to resolve this issue.

Due to floating connection to the RXRESETDONE port, rx_startup_fsm is stuck in the WAIT_RESET_DONE state.

This initiates periodic reset due to timeout. This failure is seen in simulations when run for a very long time, and on hardware.

This signal does not have a driver. The following snapshot shows the connectivity of the RXRESETDONE port with the <core_name>_rx_startup_fsm module instance. 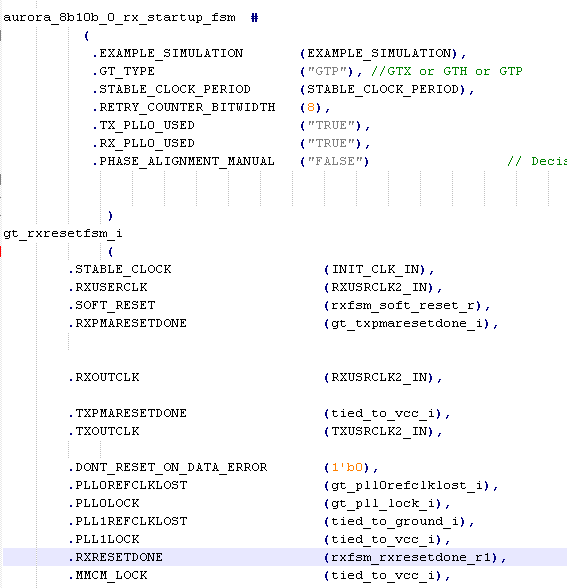 Please refer to the code snippet below for the required edits:

All of the Aurora 8B10B based designs targeting Artix-7 MUST be updated if the following conditions are met.

Designs in production which use the Aurora 8B10B IP from Vivado 2015.2 or earlier are not impacted. This issue will be fixed in Vivado 2016.2.