The optimal clocking topology for OSERDESE3 is shown in the diagram below.

CLKOUT of the MMCME3 should drive two BUFGCE_DIVs in parallel, using the divide capability of one of the BUFGCE_DIVs to create the slower CLKDIV.

Note that it is not absolutely required that the global buffer driving the High-Speed Clock (CLK) be a BUFGCE_DIV cell. It can be a BUFGCE if you have a shortage of BUFGCE_DIVs.

When using multiple outputs from the MMCME3 to create the CLK and CLKDIV, check to make sure the skew requirements are met.

Please realize that because the BUFGCE_DIV is using a higher frequency clock that is being divided down.

As such, fabric logic must be driven with the BUFGCE_DIV as shown in Fig: Fabric Clocking With BUFGCE_DIV. 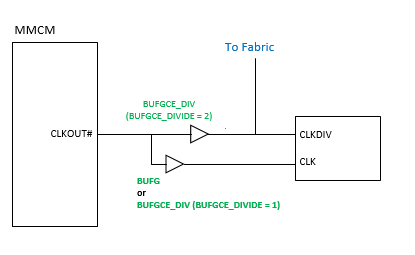 As shown in Fig: BUFGCE_DIV alignement,, with BUFGCE_DIVIDE = 2 or 4 the counters might start at different times.

By using the CLR and CE inputs, the counters can be aligned to a given clock edge.

Alternatively if you require the MMCM outputs to be phase aligned (that is CLKOUTx_PHASE) and cannot apply the correctcontrols and control the timings from Fig: BUFGCE_DIV alignment, you can use aseparate BUFG clock buffer for fabric connections.

CLK and CLKDIV ports for the OSERDES are driven by BUFG's that are only connected to the OSERDES and will have similar loading/routing. CLKOUT1 and CLKOUT2 could also be used for other component primitives (ISERDES, IDELAY, ODELAY, IDELAYCTRL) as long as the routing destinations are similar.

In Fig: Fabric Clocking With MMCM clock outputs the clock output divide settings will be a ratio of DATA_WIDTH, such that:

Because the outputs are coming from the MMCM, the MMCM will only lock when a given phase shift is achieved, in this case as defined by CLKOUT_<2,1,0>_PHASE.

If the design still fails to meet the requirement, the next step is to try to reduce the skew between the CLK and CLKDIV pins by assigning a CLOCK_DELAY_GROUP to the nets.

This tells the Vivado Implementation tools to balance the two clock networks. An example of the CLOCK_DELAY_GROUP is below:

There is no skew requirement for the ISERDES CLK and CLKDIV but the recommended clocking topology would be the same as for the OSERDES.

Use one MMCM CLKOUT driving two BUFGCE_DIVs in parallel, using the divide capability of one of the BUFGCE_DIV to create the slower CLKDIV.

The optimal clocking topology for the IDDR (and ISERDES) CLK and CLK_B is to use the same net to drive both pins and use local inversion to create the inverted clock. See the diagram below for an example.

See (Xilinx Answer 68331) for details on the skew check in Vivado Timing which causes an issue with skew checks on exclusive clock group constraints. 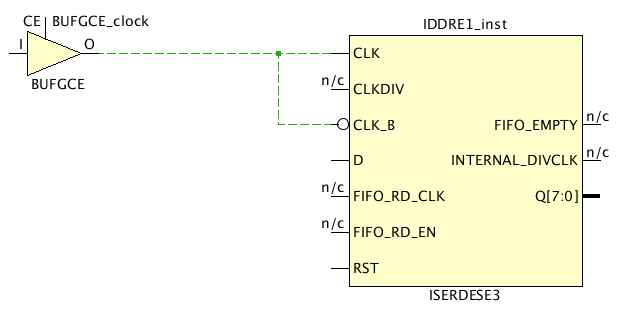