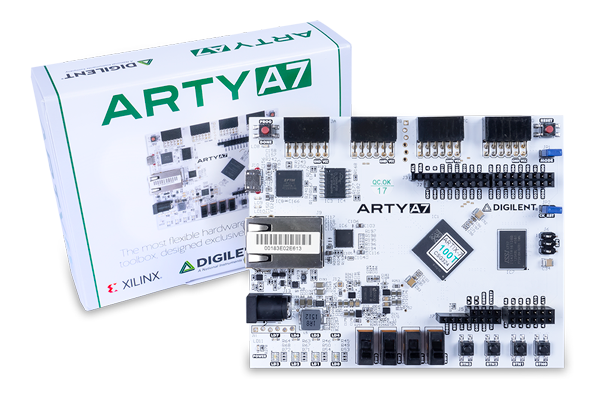 Arty A7-100: Artix-7 FPGA Development Board for Makers and Hobbyists

Arty is a ready-to-use development platform designed around the Artix-7™ Field Programmable Gate Array (FPGA) from Xilinx. It was designed specifically for use as a MicroBlaze Soft Processing System. When used in this context, Arty becomes an incredibly flexible processing platform, capable of adapting to whatever your project requires. Unlike other single board computers, Arty isn't bound to a single set of processing peripherals; one moment it's a communication powerhouse chock-full of UARTs, SPIs, IICs, and an Ethernet MAC, and the next it's a meticulous timekeeper with a dozen 32-bit timers. Additionally, with the universally popular expansion headers (Arduino™ R3 Headers and our Pmod™ headers), Arty will become the most adaptable tool in your project tool box.