In addition to its long heritage serving government grade cryptographic systems, the IDF is an integral part of the Xilinx IEC61508 (Industrial Functional Safety) certified tool chain.  Additionally, it can aid in meeting the requirements of the ISO26262 specification (Automotive Functional Safety).

The IDF is a methodology based on existing implementation tool flows (ISE design tools in this case).  Additional time spent floor-planning the design is done using existing constraint tools (PlanAhead / Vivado GUI). Verification of work products (pinout and routed design) are done with a separate and independent tool (either IVT or VIV for ISE or Vivado respectively). 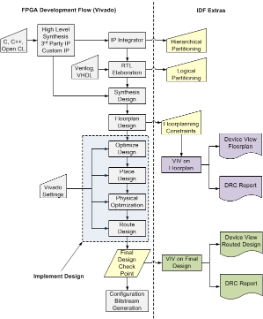 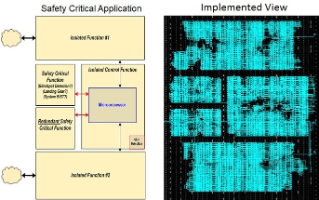 IDF Verification tools (IVT and VIV) verify that an FPGA design partitioned into isolated regions meet the stringent standards for fail-safe design. IVT and VIV are used at two stages in the FPGA design cycle. They are used first, early in the flow, to perform a series of design rule checks on floorplans and pin assignments. After the design is complete, they are used again to validate that the required isolation is built into the design.

IVT is an executable that runs outside of ISE but fully within the ISE environment. IVT runs as a set of Design Rule Checks (DRCs) required to prove the design being operated on is isolated. It outputs a graphical display of the design and a verbose text report.

Note that the current version of IVT supports Virtex-5, Spartan-6, and the 7-series family of FPGAs and SoCs.

Note that the current version of VIV supports the 7-seires family of FPGAs and SoCs in Vivadio 2015.1 and beyond.